Volume 2, Issue 1 (2015) Proceedings from the 12th Annual Meeting of the Document Academy

As the Co-Chairs of DOCAM 2015, we are delighted to introduce the second volume of The Proceedings of the Annual Meeting of the Document Academy. The 12th Annual Meeting of the Document Academy was also the first to be held in the antipodes; a particularly appropriate choice with one of the preeminent members of the Academy, Australian Professor W. Boyd Rayward attending the meeting and introducing the keynote speaker.

Hosted and supported by the University of Technology, Sydney, Charles Sturt University, NSW and Swinburne University of Technology, Victoria, this year’s DOCAM gathering brought together more than 50 scholars, students and practitioners from 11 countries and institutions under the theme of Documents Unbounded. An exhilarating keynote address by renowned scholar, Professor Geoffrey Bowker, set the scene for the meeting by inviting us to consider how new knowledge structures and modes of expression, moving seamlessly from text and images to statistics and visualizations and from structured databases to performing databases fit into a documentary worldview.

The three days of friendly, lively discussion and intellectually stimulating debate that followed on from the keynote are reflected in the final submissions to this year’s Proceedings with authors exploring new ways of considering data, documents, records and artefacts, alongside of some ‘classic DOCAM themes’. Boell’s and Hoof’s discussion of Henry Gantt’s first published ‘Gantt Chart’ (1903) introduces the theoretical work of Fritz Heider in an exploration of the generative role of this historic document in developing work processes. While materiality and form are emphasized again this year, the unbounded nature of new media, including social media, are in the foreground with both the limitations and limitless dimensions of the ‘new’ explored. Courbières’ and Roux’s paper, Wikia: Between Documentary Simulacra and Documented Fictions, examines the tension between the apparently boundless nature of collaborative documents in the Wiki and the controls that are in place to constrain the document.

Examining the unbounded document has many of this year’s papers questioning the boundaries presented by form to raise the importance of context and discourse. Lundh and Dolatkhah exemplify this in their paper, Becoming Citizens, Dialogical Document Work in the Classroom of the People’s Home. Tim Gorichanaz extends this view with his focus on human agency in For Every Document a Person. People, as authors, readers, workers and agents, surface this year as the most significant theme in an unbounded document universe and there are a number of very important papers reminding us of the place of documents in supporting human rights including Yerbury’s and Shahid’s The Becoming of Human Rights Documents. Geir Grenerson asks us to question ‘who really speaks through the archival document’ and encourages us to seek alternative voices in his paper, The Role of the Libraries in the Norwegianization Policy 1880 -1905.

The conference concluded with an enchanting and thought provoking presentation by Bhuva Narayan in her paper Chasing Antelopes, a presentation which took us with Bhuva on her ancestral journey through the knowledge trees of India. In this editorial note, we only have the space to highlight a few papers from this year’s outstanding editorial reviewed contributions and therefore encourage you to pick up from here and read them all. We look forward to the next DOCAM conference and proceedings.

The Becoming of Human Rights Documents: An Exploration of a Social Media Campaign
Hilary Yerbury and Ahmed Shahid

From Object to Mediator: The Agency of Documents
Sally Irvine-Smith

For Every Document, a Person: A Co-Created View of Documents
Tim Gorichanaz

Digital Engagement: Personality Is The Context Of The Text
Diane C. Spencer-Scarr

From Transaction to Interaction: Socio-materiality, Reliability and Transparency in an Age of "Unbound Documents"
Christopher W. Colwell 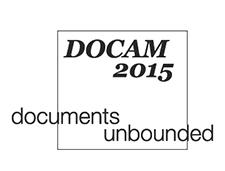 The DOCAM'15 theme Documents Unbounded examines the challenges ahead, as our understanding of data, documents, records, artifacts, evidence, and memory form in the continuously changing landscape of new media and communications.

DOCAM'15 was jointly hosted by the IKM and Digital Studies Program University of Technology, Sydney (UTS) and School of information Studies at Charles Sturt University (CSU), in Sydney, Australia from July 20-22, 2015.